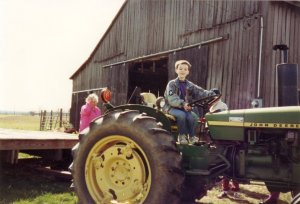 Happy Friday!  Driving around lately I have noticed how tall the corn has gotten and that reminded me of all the hard-working farmers out there who provide the food we enjoy everyday.  So, in their honor, here are a few farmer related jokes.

A bus filled with politicians was going driving down a country road one afternoon, when all of a sudden, a tire blew out causing the bus to run off the road and crash into a large tree in an old farmer’s field.

Seeing what happened, the old farmer went over to investigate. He then proceeded to dig a hole and bury the politicians.

A few days later, the local sheriff came out, saw the crashed bus, and asked the old farmer, “Were they all dead?”

The old farmer replied, “Well, some of them said they weren’t, but you know how them politicians lie.”

A man’s car stalled on a country road one morning. When the man got out to fix it, a cow came along and stopped beside him. “Your trouble is probably in the carburetor,” said the cow.

Startled, the man jumped back and ran down the road until he met a farmer. The amazed man told the farmer his story.

“Was it a large red cow with a brown spot over the right eye?” asked the farmer. “Yes, yes,” the man replied.

“That would be Bessie,” said the farmer. “I wouldn’t listen to her, she doesn’t know a thing about cars.”

A newlywed farmer and his wife were visited by her mother, who immediately demanded an inspection of the place. The farmer had genuinely tried to be friendly to his new mother-in-law, hoping that it could be a friendly, non-antagonistic relationship. All to no avail though, as she kept nagging them at every opportunity, demanding changes, offering unwanted advice, and generally making life unbearable to the farmer and his new bride.

While they were walking through the barn, during the forced inspection, the farmer’s mule suddenly reared up and kicked the mother-in-law in the head, killing her instantly.

At the funeral service a few days later, the farmer stood near the casket and greeted folks as they walked by. The pastor noticed that whenever a woman would whisper something to the farmer, he would nod his head yes and say something. Whenever a man walked by and whispered to the farmer; however, he would shake his head no, and mumble a reply.

Very curious as to this bizarre behavior, the pastor later asked the farmer what that was all about.

It is not easy to walk alone in the country without musing upon something.  ~Charles Dickens