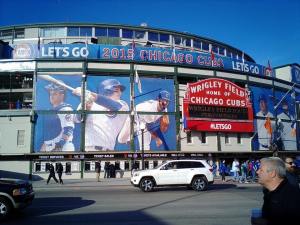 If you know me or if you have been reading this blog for any time, you have probably figured out that I have an affinity for baseball.  As a child I caught a bad case of baseball fever and it has never let go.

Every once in a great while I get to feed this fever in a special way by attending a major league baseball stadium at a venue that I have never been to.  Tonight was one of those nights as I made a pilgrimage to see the Chicago Cubs at venerable Wrigley Field,  “The Friendly Confines” has been the host to major league baseball for over 100 years now.  The place is just dripping with history.  Yes, there have been night games for many years now, yes there is now a state-of-the art giant scoreboard towering above left field.  But this is still the place where Billy Williams, Ron Santo, Don Kessinger, and Ernie Banks played.  This is the place that was the site of Babe Ruth’s “called shot” in the 1932 World Series.  This is where Pete Rose had hit 4,191 tying him with Ty Cobb.  This is where Gabby Hartnett, Greg Maddux, Fergie Jenkins, and Ryne Sandberg played their way into the hearts of the loyal fans.  My evening at Wrigley took me to the past as I watched the emerging Cubs stars of the future.  The names keep changing, but the game remains, essential the same:  three strikes are an out, four balls are a walk, the bases are ninety feet apart.

Yet the evening also made me feel a bit old.  It got me thinking about the other palaces of baseball that I have visited.  There is Great American Ballpark in Cincinnati, The New Bush Stadium in St. Louis and Tropicana Field in St. Petersburg.  These, in addition to Wrigley are the stadiums currently in use that I have been too.  What makes me feel old are the stadiums that I have seen major league baseball games in that are no longer in use.  This list is composed of Crosley Field AND Riverfront Stadium in Cincinnati, the old Busch Stadium in St. Louis, the old Comisky Park in Chicago, Exhibition Park in Toronto, Arlington Stadium in Texas and The Kingdome in Seattle.  If I have been to seven stadiums that have been replaced, I must be old.  If I have been to three different stadiums in Cincinnati to see the Reds, I must be getting really old!

But the game goes on and the fever remains no matter how old I get.

4 thoughts on “Take Me Out to the Ballgame”