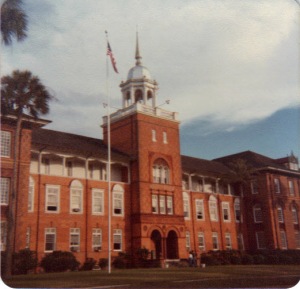 I came across an article the other day about Amherst College in Massachusetts and their quest for a new mascot.  Apparently one of the front-runners is Hamsters.  One can only wonder how much  fear a small household pet would bring upon an arch rival.  However, Amherst would hardly be alone among colleges that do not have an intimidating mascot. I began my college experience as a Stetson Hatter.  There was a guy in a giant hat that covered the upper half of his body who would run around during basketball games which is not very high up on the intimidation scale.  Here are some of the other less fierce mascots that might show up at an arena or stadium near you.

Ohio State “Buckeyes” – while a buckeye is a small nut, at least it is poisonous.

Stanford “Tree” – trees are not that intimidating, but the face they have put on it is a little creepy.

Texas A&M University at Corpus Christi “Islanders” – is the competition headed for a difficult game or a relaxing vacation?

Saint Bonaventure University “Bonnies” – perhaps if you lose they send the opponent over the ocean?

Indiana State University “Sycamores” – another tree only  this one does not even have the creepy face.

Kent State University “Golden Flashes” – add a bird head and the golden flash is transformed  into Flash the Eagle – why not be the Eagles then?

University of Pennsylvania “Quakers” – can’t we all just be Friends?

University of Richmond “Spiders” – while spiders can be a bit intimidating, few can withstand the average shoe.

Youngstown State University “Penguins” – 1) penguins are not that intimidating; 2) there are no penguins in Ohio outside of a zoo.

University of Delaware “Fightin’ Blue Hens” – at least they are fightin’ hens.

Southern Illinois University “Salukis” – would Persian Greyhounds be any better?

Delta State University “Fighting Okra” – one wonders why there are not more sports teams with veritable related mascots.

University of Akron “Zips” – I am not sure what a zip is and I have no idea what it has to do with a kangaroo.

Saint Louis University “Billikens” –  a mythical good-luck figure who represents “things as they ought to be” – well mascots out to be a bit more intimidating.

University of Evansville “Purple Aces” – watch out for paper cuts!

University of California Santa Cruz “Fighting Banana Slugs” – it is all fun and games until someone brings out a salt shaker.