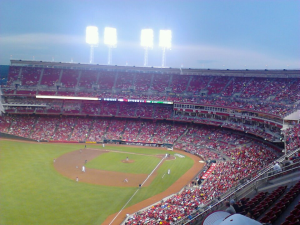 The world is full of mysteries like the Bermuda Triangle, the Loch Ness Monster, Bigfoot, and the Wave. The Wave –  when sports fans stand and raise their arms, section by section, creating a wave-like crest throughout a stadium or arena.  As with most mysteries, there is no consensus on the origin of the Wave.  Most stories of the phenomenon’s origin suggest that the wave first started appearing at North American sporting events during the late 1970s and early 1980s.   One story attributes the origin of the Wave to Krazy George Henderson (what sane person would create the wave?) who allegedly led a wave on October 15, 1981 at a baseball game in Oakland, California.  Just a few weeks later, on October 31, 1981 (Halloween no less), a Wave was created at a University of Washington football game in Seattle.  So while Krazy George claims to have created it, the folks in Seattle claim to have popularized it.  It appears safe to say that the Wave is just something else we can add to the long list of things that can be blamed on the West Coast.

While the Wave might have been interesting and amusing the first three dozen times I was at a game and saw it, I think it is has served its purpose, if it had one.  Yet, if you go to a baseball game this month, at a half-full stadium, the odds are that about two-thirds through the game some yahoo will try to get the Wave started.  And said yahoo will probably pick the most critical moment of the game to do so and he will think he is doing something cool, unique, and new.  He would be wrong on all counts.

Take a moment and reflect on the 1980’s.  This was the decade that gave us  Rubik’s Cubes, Cabbage Patch Kids, boom boxes, break dancing, Care Bears, Mullet hair, and parachute pants.  Do we really want to keep the 80’s around?

The next time you are at a sporting event and the Wave starts, I urge you to fight the temptation and just calmly keep your seat.  Let the Wave die as a slight ripple.  It is time to just say good-bye to the wave!