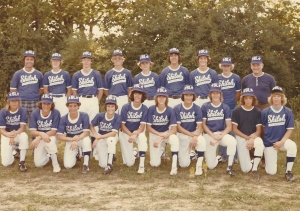 We can now officially put a very long and very cold winter behind us because the baseball season is underway.  I have enjoyed baseball for as long as I can remember and I was fortunate to grow up in Southwestern Ohio during the days of the Big Red Machine.  So, of course, I dreamed of playing for the Reds.  Of course that never happened, I never even managed to make my high school team.

Probably the best baseball team I had a chance to play with was the 1975 Shiloh – Ft. McKinley Senior Division All-Star Team at the conclusion of what was my last year of Little League Baseball.  I pick this as the best team I ever played on because we actually managed to win our first game in the double elimination Little League tournament. (It was also one of those rare times when I was not the only “Leonard” on a team.)  I had made the “all star” team the previous four years but we had never won a game in the Major Division or the Senior Division tournament and were quickly dismissed.

But 1975 was our year.  Tucked away in an old red notebook I came across a clipping from the Argus-Sentinel by Sports Editor Ken Palen that recaps the highlight game of my brief and not quite illustrious baseball career.    The headline, from the Englewood paper proclaimed “Englewood Seniors One-Hit in Opening Tourney Game.”  Mr. Palen mentions the old baseball adage that “good pitching stops good hitting.”  That was definitely the case this day as we scored 8 runs and our ace pitcher, Jeff Mitrisin, allowed only one-hit and that was with one out in the seventh and final inning.

We scored 5 runs in the second inning on our way to victory.  If I recall correctly, I led off that inning and drove the ball the tremendous distance of about twenty feet, the ball stayed fair and just died on the first base line, a classic swinging bunt for a single.  I scored the first run as we batted around that inning highlighted by doubles by Larry Olevitch and Chris Pulos.  Englewood changed pitchers for the third inning and I got to lead off again.  In what may have been the best sentence ever written in the history of amateur baseball, Mr. Palen noted that the next pitcher “was the victim of a third inning home run by Lenny Wagers that easily cleared the 307 ft. sign in center field.”

Unfortunately we lost our next game 4-3 in 11 innings and followed that with another loss.  We were eliminated again and my baseball career was over.  I suppose it is a little sad that I peaked at 15 and was washed-up and out of organized baseball at 16, but 40 years later, I still have some great memories.