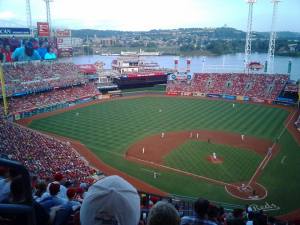 Happy Friday!  Hope you have a great weekend as we greet the unofficial start of summer.  Take some time to pause and ponder the purpose and meaning of Memorial Day.

The baseball season is in full swing, but alas, it is not all joy in Mudville or Cincinnati.  So my advice is to find some humor in it, there is a lot of season left.

One morning in elementary school, the students were going to a geography class. The teacher wanted to show the students where cities and states are.

The teacher asks the class, “Does anyone know where Los Angeles is?” Billy raises up his hand and says, “It is in California!”. The teacher replies, “Very good, Billy!, now can anyone tell me where Houston is?”

Trying to confuse the children, she now asks, “Where’s Cincinnati?” Tommy raises his hand and says, “Oh! Pick me!!!, I know?” The teacher says, “OK, Tommy where is Cincinnati?”

I heard that the US Post Office was going to issue stamps with pictures of Reds relief pitchers on them, but they decided not to sell them because people could not figure out which side to spit on.

What’s the difference between the Reds and dirt? Not much, they can both be easily swept.

The other day was take your daughter to work day. The Reds players had a great time and played a little scrimmage against their daughters, unfortunately they lost, 8-2.

What does Cincinnati Reds Manager Bryan Price have in common with Alex Trebek? Both of their jobs are in Jeopardy.

I was going to buy my grandson a Cincinnati Reds jersey, but then a noticed the tag that warned that it was a choking hazard.

Thinking about the Reds relief pitchers this year: