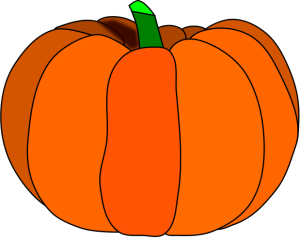 The days are getting shorter and cooler, the leaves are stating to change colors. the calendar says October.  That means it is time for pumpkin and pumpkin spice to make its annual appearance which brings only one question to my mind: why?

I really do not get all the fuss with pumpkin and pumpkin spice.  First of all there is only one way to eat pumpkin pie and that is with Cool Whip, lots and lots of Cool Whip.  I believe science has determined that the optimal ratio is one part pumpkin pie to twelve parts Cool Whip.  In fact 93.7% of adults find pumpkin pie tolerable if served in this ratio.

I have never been much of a fan of pumpkin pie.  (Take my word, pecan pie is the way to go in the fall!)  Perhaps that orangy-brown paste that comes out of the can brings up some repressed memories of baby food that I did not care for but might have been force-fed as an infant along with a variety of other “strained” vegetables.  I imagine most of the “strain” involved getting me to eat them.  And what exactly is in that can of pumpkin anyway?  The USDA defines canned pumpkin as: “The canned product prepared from clean, sound, properly matured, golden fleshed, firm shelled, sweet varieties of either pumpkins and squashes by washing, stemming, cutting, steaming and reducing to a pulp. ”  The fact is that you cannot even be sure that your pumpkin pie is, in fact, pumpkin pie.  “Gee that Thanksgiving dinner was great now let’s have a piece of that pie that may or may not have some pumpkin in it.”

Can’t we just please stop the madness?!!  This is not even pumpkin flavor, this is pumpkin spice – the stuff you put on the above mentioned pumpkin or not pumpkin puree when you make a pie so that, given the proper ratio of pumpkin pie and Cool Whip it can be tolerated by 97.3% of the population.

What in the world, you might ask is pumpkin spice?  It is a combination of cinnamon, nutmeg, ginger and cloves.  So what is it about fall that makes one want to put cinnamon, nutmeg, ginger and cloves on everything imaginable including Peeps? And if many of you are so drawn to this spice combination, why don’t you crave it all year round?  I think I have the answer, it is a marketing ploy – all this pumpkin spice stuff is “only available for a limited time” which convinces you that you must have it, so you go out and spend your hard-earned money, not because you like it but because it is “only available for a limited time.”  How many of you once you have that pumpkin spice latte or Peep in hand think to yourself, “You know I really don’t even like this, but it is only available for a limited time and by golly am I lucky it was still available?”

I know many of you are thinking that I am just delusional and that you really do like your pumpkin spice cereal.  You have your feelings about pumpkin and pumpkin spice and I have mine and we will just have to agree to disagree.  To take and slightly adjust a line from Linus in The Great Pumpkin Charlie Brown: “There are three things that I’ve learned never to discuss with people: religion, politics, and the Pumpkin spice.”

1 thought on “Fall and Pumpkin Spice is in the Air”