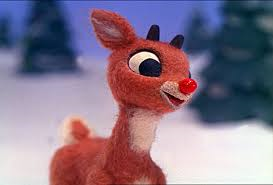 Happy Friday and Happy December!  Hanukkah is here and Christmas is just around the corner.  We are in the thick of all the Christmas music on the radio and in the stores as well as all of the holiday specials on television.  I noticed that Rudolph the Red-Nosed Reindeer is on this weekend and thought it was time to dust off post from a few years ago.  I suppose that makes this post a Christmas rerun but hey,  if the show can air more than 50 years running, I can brush off an old post for another run.

Every year since 1964, Rudolph the Red-Nosed Reindeer airs on television this time of the year.  It is one of four Christmas specials from the 1960’s that continue to make an annual yuletide appearance.  The others are How the Grinch Stole Christmas and A Charlie Brown Christmas (two of my favorites) and  Frosty the Snowman (one of my least favorites).

I would imagine that you have seen Rudolph, probably many, many times.  But have you ever stopped to think much about this seemingly innocent story?  For instance have you ever noticed how mean and unSanta-like Santa is?  Have you noticed that Santa is portrayed as a self-centered, mean, impatient, old man.  He is certainly not a “right jolly old elf” by any means in this story.  Remember how all the Elves work long and hard on a song especially for Santa in their spare time?  The joyful elves present their song to an obviously disinterested Santa who responds at the end with “it needs work, I have to go.”  Perhaps Santa was preparing for a career as a judge on American Idol?  Later as Mrs. Claus is trying to fatten him up for the big day he whines, “How can I eat? That silly Elf song is driving me crazy!”

Plus, if you think about it, Santa’s attitude toward Rudolph throughout the entire show is quite self-serving.  While Santa is initially impressed with Rudolph’s performance during the reindeer games, once Rudolph’s fake nose falls off Santa quickly changes his tune and scolds Rudolf’s father while the other reindeer children mock Rudolph.  Perhaps Santa needs #stopbullying.  It is only at the end when Santa realizes that completing his job is dependent on exploiting Rudolf’s unique abilities that he sees any real value in Rudolph.

After all these years, I still do not understand the Island of Misfit Toys.  Charlie in the Box is there because of his name?  Currently on ebay  you can buy a Sock Monkey in the Box, a Curious George in the Box, a Flipper in a Box, a Magic Dragon in the Box and a Sponge Bob Square Pants in the Box.  There are more than 200 listings for a Charlie in a Box! So what is the issue here?  I think it is his attitude the chip on his shoulder – not his name.

What about the train with square wheels on the caboose.  Wasn’t Hermey a trained Elf?  Don’t you think a trained Elf could have made some round wheels for the caboose?  He probably could have helped the boat that sunk to be able to float as well.  Why didn’t Hermey help the misfit toys?  It seems to me that if Hermey really cared about the misfit toys, he could have helped a few of them out.  And by the way, at the end, was it really a good idea to let Hermey practice dentistry in his spare time without any formal training?  I wonder if he had any malpractice insurance?

Then there was the Dolly for Sue.  What exactly was her problem?  Apparently Arthur Rankin of Rankin-Bass has stated that Dolly had psychological issues caused by being abandoned by Sue.  Well what kid wants a toy with psychological issues? Maybe they could market her as a doll that comes with her very own “baggage.” Perhaps she was a sister to the Talking Tina doll that made an appearance on an episode of The Twilight Zone.

Yukon Cornelius, would you let your young ones set off to the unknown with him as a guardian?  What exactly was he teaching impressionable little ones?  He throws his pick-axe into the snow, picks it up and licks it in hopes of finding silver or gold? What are the odds that would ever work?  Plus it must  be quite unsanitary and who would want to risk getting metal splinters on their tongue?

However, they saved the cruelest moment in the show for the end.  It is supposed to be a feel good moment as Santa delivers the long forgotten misfit toys.  Remember how an Elf comes out of Santa’s bag and starts giving each misfit toy a little umbrella as a parachute as he sends it to gently drift down to its new home?  Next time you watch Rudolph pay close attention to the misfit bird.  Remember the bird is a misfit because it can swim BUT IT CANNOT FLY.  The Elf holds the umbrella in one hand and the bird in the other, then he pauses and lets go of the misfit swimming bird.  He waves “bye-bye” as the “bird” free falls toward the earth.  If Less Nessman was on the scene he would no doubt say the bird “hit the ground like a sack of wet cement.”

And all these years, you thought Rudolph was a nice, innocent, little story.

Like I said, the outside world is up to its ears in danger. ~ Sam the Snowman, Rudolph the Red-Nosed Reindeer

1 thought on “Friday Funny December 7, 2018 Taking Another Look at Rudolph the Red-Nosed Reindeer”