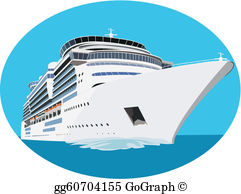 Happy Friday!  We are coming into the home stretch of summer and that means many are using vacation time.  I hear a cruise is a nice vacation, so here are a few jokes to buoy your spirits.

Do you have time for a joke about the world’s fastest cruise ship?  Don’t worry, it’s a quick one liner.

Is a zombie’s favorite activity on a cruise ship shuffleboard?

I hear the latest trend on cruise ships is to install trampolines in all the staterooms- apparently everyone is jumping on board.

You should you never start a conversation by talking about the Titanic.  It is a terrible ice breaker.

A passenger on a cruise ship calls the Purser’s desk and asks how he can get out of his cabin.
The Purser tells him to just open the door and walk out. The passengers replies that his cabin only has two doors. One door leads to the bathroom and the other has a “Do Not Disturb” sign on it.

A man is standing on a cruise ship deck, idly watching the water. On a nearby island, he spots somebody. He strains his eyes to see, and can make out that it is a very thin, dirty looking man with long, wild hair. He watches him jump up and down, wave, run along the beach and can even faintly make out that he man is yelling at the top of his lungs.

Intrigued, the Tourist turns to the Captain, who is standing nearby:

The Captain shrugs. “I do not know, but he always seems pretty excited when we sail by.”

A magician was working on a cruise ship in the Caribbean. The audience would be different each week, so the magician allowed himself to do the same routine over and over again.However, the Captain had a parrot that saw the show every week and began to understand what the magician did in each and every trick. After a while, he started shouting in the middle of the show:

“Squawk! Not the same hat!”

“Squawk! Flowers under the table!”

“Squawk! All cards Ace of Spades ?”

The magician was furious but couldn’t do anything; it was the captain’s parrot, after all.

One day the ship had an accident and sunk. The magician found himself on a piece of wood in the middle of the ocean, and of course the parrot was by his side. They stared at each other with hate, but did not utter a word. This went on for several days.

After a week the parrot finally said: “Okay, I give up. What’d did you do with the ship??”

A vacation is what you take when you can no longer take what you’ve been taking. ~Earl Wilson