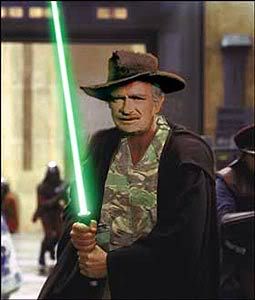 Happy Friday! I have not made it to see the new Star Wars movie yet, but the arrival of the latest installment brings to mind the question of whether or not there might be Redneck Jedi’s.  See how you stack up.

that “disturbance in the Force” was just last night’s baked beans.
the inside of your house looks more like Dagobah than the outside.
your land-speeder has a gun rack.
you call Yoda your Li’l green buddy.
you fight with a light-saber in one hand and a spit cup in the other.
you’ve ever used your light-saber to pick your teeth.
your Jedi robe is camouflage colored.
at least one wing of your X-Wing is primer colored.
you’ve ever said that Ewok tastes a lot like chicken.
no grammatical errors in the way Yoda talks you can find.
you have ever used the Force in conjunction with fishing or bowling.
you have ever had your R2 unit use its arc welding torch to get the light the grill.
you have ever used a light-saber to skin a deer.
you have bantha horns on the front of your land-speeder.
your master ever said “My finger you will pull..hmmm?”
you have ever had an X-wing up on blocks in your yard.
the worst part of spending time on Dagoba is the dadgum skeeters.
wookies are offended by the way you smell.
you have fuzzy dice hanging in the cockpit of your X-Wing.
you’ve used a storm trooper helmet as a spittoon.
you think the idea of sleeping inside the belly of a Tauntaun sounds cozy.
you have a cousin who bears a strong resemblance to Chewbacca.
you’ve ever gone AT-AT tipping.
your belt buckle weighs more than your light saber.
the tail light covers on your land-speeder are made of red tape.
you are known to say, “May the Force be with Y’all.”
you feel that duct tape is like the force: it has a light side and a dark side and it holds                  the universe together.

“You do have your moments. Not many, but you have them.” ~ Princess Leia, The Empire Strikes Back