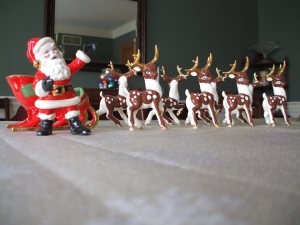 I thought I would share an encore edition of a Friday Funny from 2009 (before I knew what a blog was).  So, with apologies to Clement Clarke Moore, here is my adaptation of his classic for the digital age.

‘Twas the day before Christmas, when at my house

I was at the computer, moving the mouse;

It was time for another Friday Funny, does anyone care

If in the morning, the email inbox has a funny there?

Two of my boys were still nestled all snug in their beds,

While visions of homemade cookies danced in their heads;

While mamma was working, I was off for the day,

It seemed like there was nothing funny for me to say,

When out on the Internet there arose such a clatter,

I sprang to my browser to see what was the matter.

Away to another window I flew like a flash,

Hoping as always that my computer would not crash.

The back-lighting of the monitor produced a glow

Which gave a slight luster to objects below,

As I wondered from web site to web site what should appear,

But a miniature sleigh jpg, complete with reindeer,

With a little driver icon, so lively and quick, I knew in a moment it must be St. Nick.

More rapid than dsl downloads his cursers they came,

And he whistled, and shouted, and called them by name;

As deleted lines that before the backspace button fly,

When they meet with a click, mount to the sky,

With a file full of toys, and St. Nicholas too.

And then, in a twinkling, I heard on the speaker

The prancing and pawing of each little squeaker.

As I drew in my hand, and was scrolling around,

Downloading an mpeg, St. Nicholas came with a bound.

He was digitally dressed from his head to his foot,

And his clothes were photo-shopped with ashes and soot;

A bundle of toys he had superimposed on his back,

And he looked like a Trojan file just opening his pack.

His eyes — they pulsated! his dimples they grew!

His cheeks had roses painted on them, his nose was blue!

His droll little mouth transfigured to a bow,

And the beard of his chin turned into white snow;

His pipe was a tree stump he held tight in his teeth,

And the smoke wafted up and became a green wreath;

He had a broad face and a little round belly,

That shook, when he laughed and turned into jelly.

He was chubby and plump, a right jolly old elf,

And I laughed when I saw him, in spite of myself;

Soon gave me to know I had no virus to dread;

He spoke not a word, but went straight to his work,

He backed up my hard drive; then turned with a jerk,

And laying his finger aside of his nose,

And giving a nod, up the window he rose;

He sprang to his jpg, to his team gave a whistle,

And away they all flew like the down of a thistle.

But I heard him exclaim, ere he deleted his cookie from sight,

“Merry Christmas to all, and to all a good night.”

2 thoughts on “The Night Before Christmas In The Digital Age”